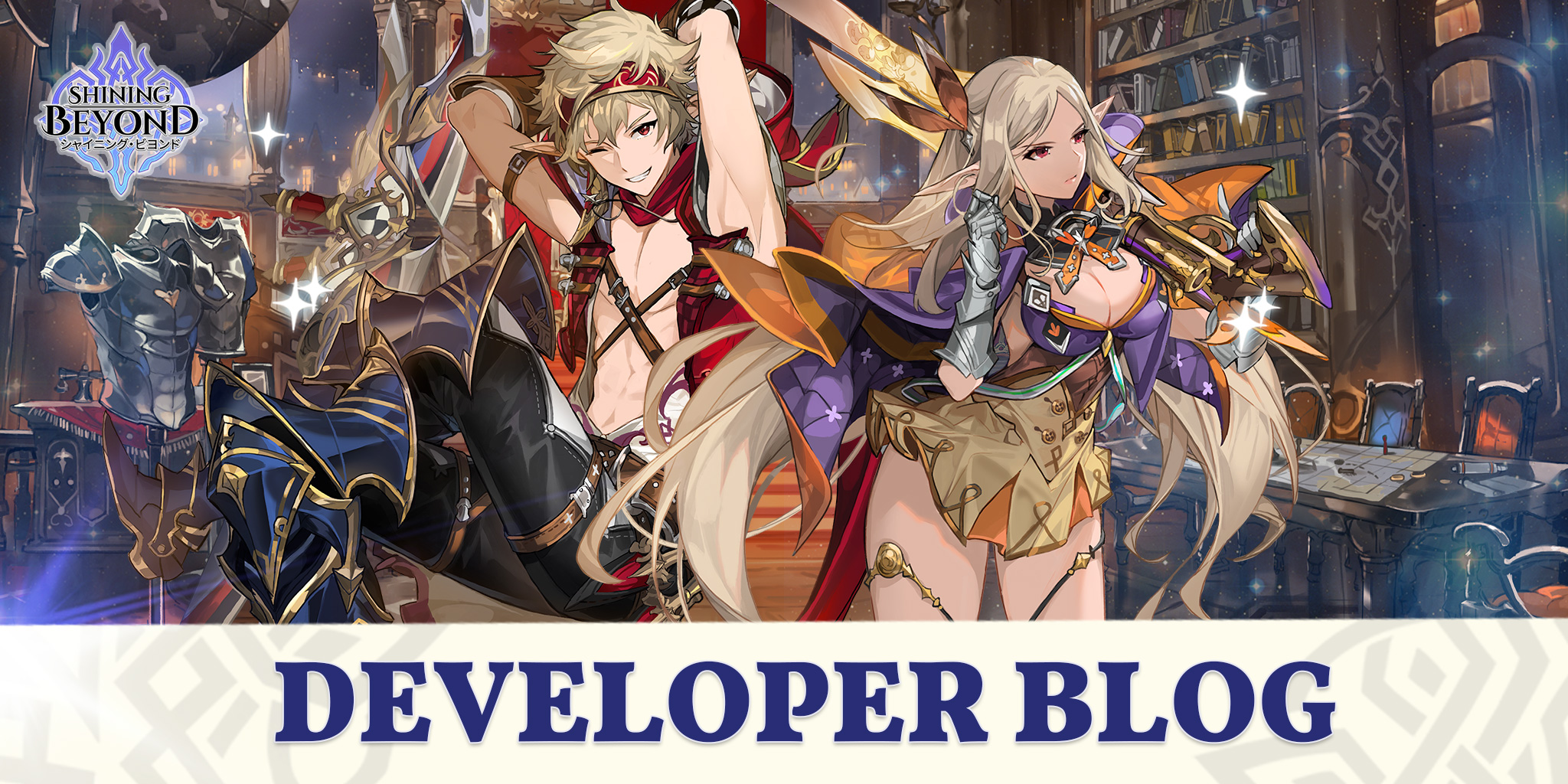 In this Developer Blog post, we’d like to take a moment to go through these new Guild features and improvements coming September 16th: 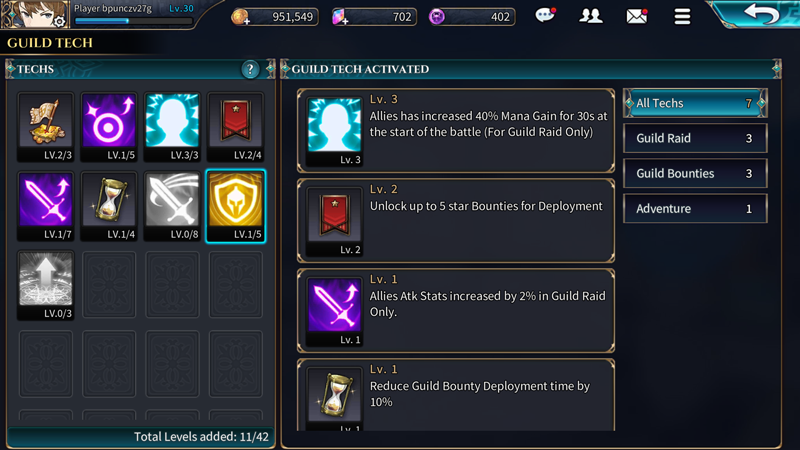 Introducing Guild Tech Tree, a brand new way to power up the offensive and defensive capabilities for all members of your guild!

To access the Guild Tech feature, you will need to meet the following requirements:

1. A player must have reached level 13 to unlock the Guild feature

2. All players who create a new guild or are already in a guild can access the Guild Tech Tree

3. To upgrade a Guild Tech, the guild must possess the required amount of Guild Tech Points which are obtainable from Guild Bounties, Donations and Guild Quests

Activated Guild Techs will affect all guild members. Each tech has different benefits depending on which categories your guild has chosen to be upgraded. There are 3 Guild Tech categories:

1. Guild Raid Techs: All guild members will obtain an additional offensive and defensive power-up for their heroes during their Guild Raid battles.

2. Guild Bounty: All guild members will have their deployment time reduced when they deploy Guild Bounties and, depending on the level, unlock more bounties with a higher rarity for deployment. (Note: this effect will not affect the Treasure Bounty feature)

3. Adventure: All Guild Members will receive additional offensive and defensive power-ups for their heroes when attempting Campaign Story stages. 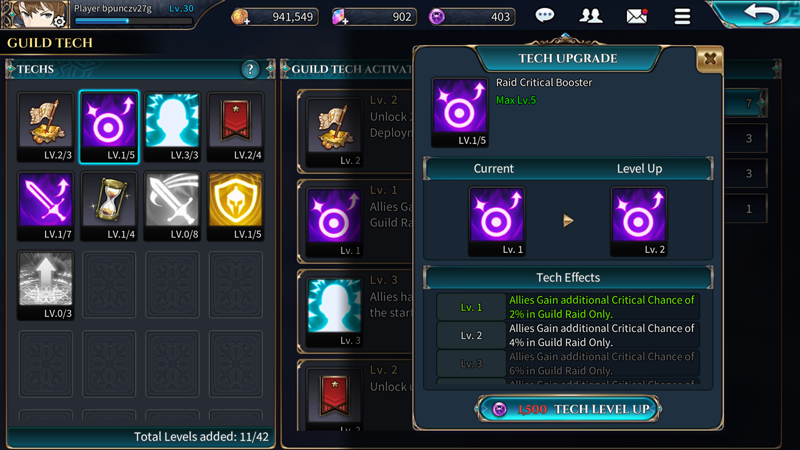 As shown in the example above (refer to the image), once this particular Guild Tech has been activated, all guild members will be able to receive an additional boost of a certain percentage while in Guild Raid. 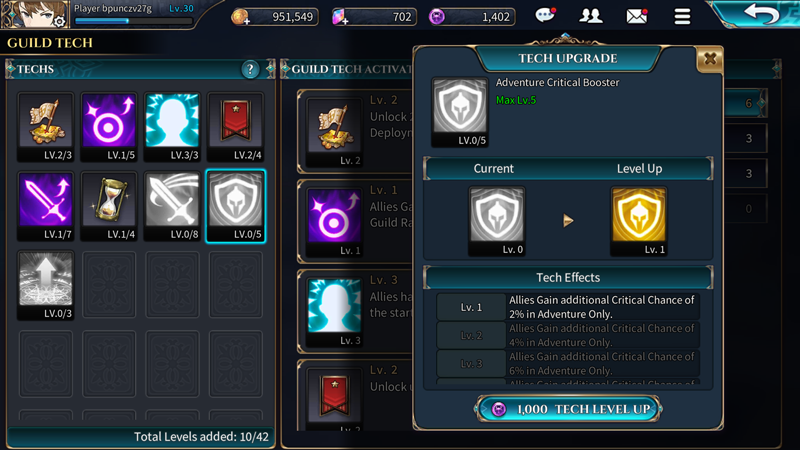 Guild Tech is a feature that will not only provide a power boost in Guild Raid for players. It can also provide a boost in Campaign Story stages — if your guild chooses to upgrade the Adventure Tech category.

Of course, your guild has to first amass some Guild Tech Points before you can start pumping them into the various categories.

You can obtain Guild Tech Points through the following ways: 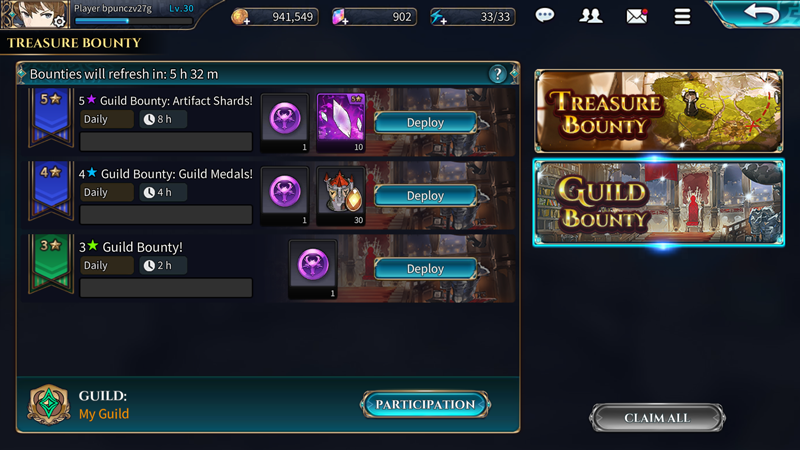 Participate in Guild Bounties by sending your heroes off to perform bounties, and claim Guild Tech Points once the job is done to upgrade the Guild Tech Tree! 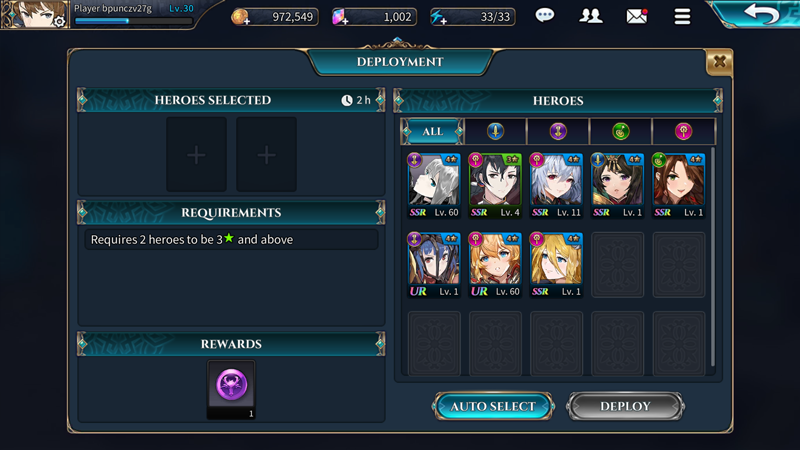 Similar to Treasure Bounty, you will need to send out heroes that follow the requirements listed in order to attempt a bounty and receive the bounty rewards after the required amount of time has elapsed.

Do note, however, that heroes who have already been deployed for Treasure Bounties will not be available to be sent out for Guild Bounties.

In general, with Guild Bounties the rewards you’ll receive are Guild Tech Points that your guild can then enhance the Guild Tech Tree with.

Other than Tech Points, you can also expect to receive Guild Artifact Shards as a reward from Guild Bounties. Use these shards to forge Guild Artifacts, which will provide additional stats to any hero you equip it to. Unlike Awakening Artifacts however, Guild Artifacts will not grant any bonus skills to the equipping hero. 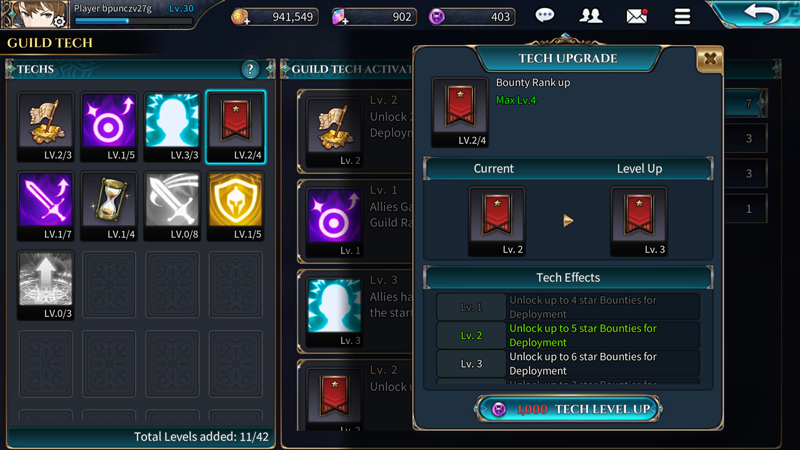 By upgrading the Guild Bounty category on the Guild Tech Tree, all Guild members can enjoy the following benefits:

The further the upgrades, the more Bounties you’ll be able to take on and clear daily! 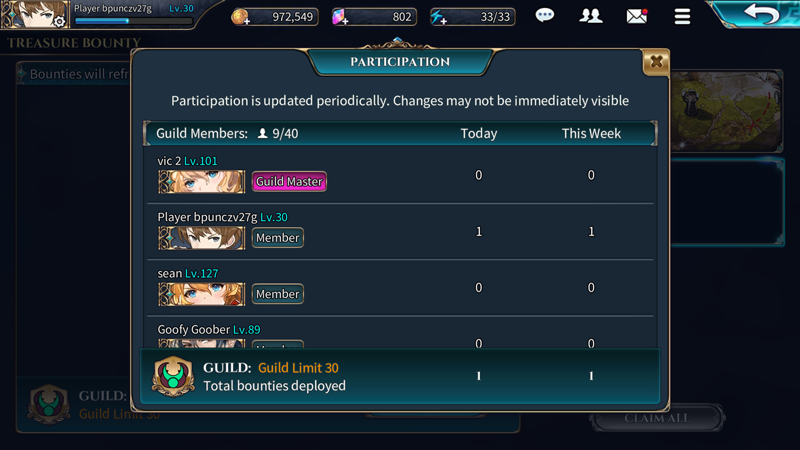 All Guild members can also check their contributions through the “Participation” button. The number is updated periodically, and changes may not be immediately visible. 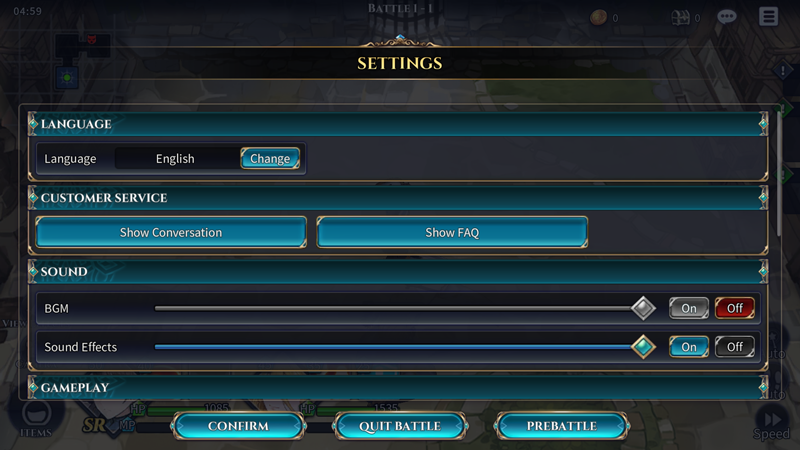 With this update we’re also introducing a number of QoL improvements, of which we’ll cover three today. For the full list of improvements, please check out the patch notes when they are published.

While in the middle of attempting a stage, players can now open the mid-combat Settings menu and press on the “Pre-battle” button to exit to the Team Formation screen before the stage begins. This is as opposed to using the “Quit Battle” button which takes players back to the main menu.

Improved + and – Button Function in Forge and Bag

In our next update, players will no longer have to tap on the + or – buttons numerous times to add or remove items. Simply long press the + or – button, and the system will automatically increase or decrease the number of items indicated for as long as the button is held.

That’s all for today’s Developer Blog!

Of course, these won’t be the only changes made to the game on September 16th. For the full list of bug fixes and changes, do refer to our patch notes!

As always, to be among the first to receive updates and announcements on Shining Beyond, please follow us on our official Facebook page, official Twitter (for Japan region), and Naver Cafe (for Korea region).

See you next time, brave adventurers of Feldria! 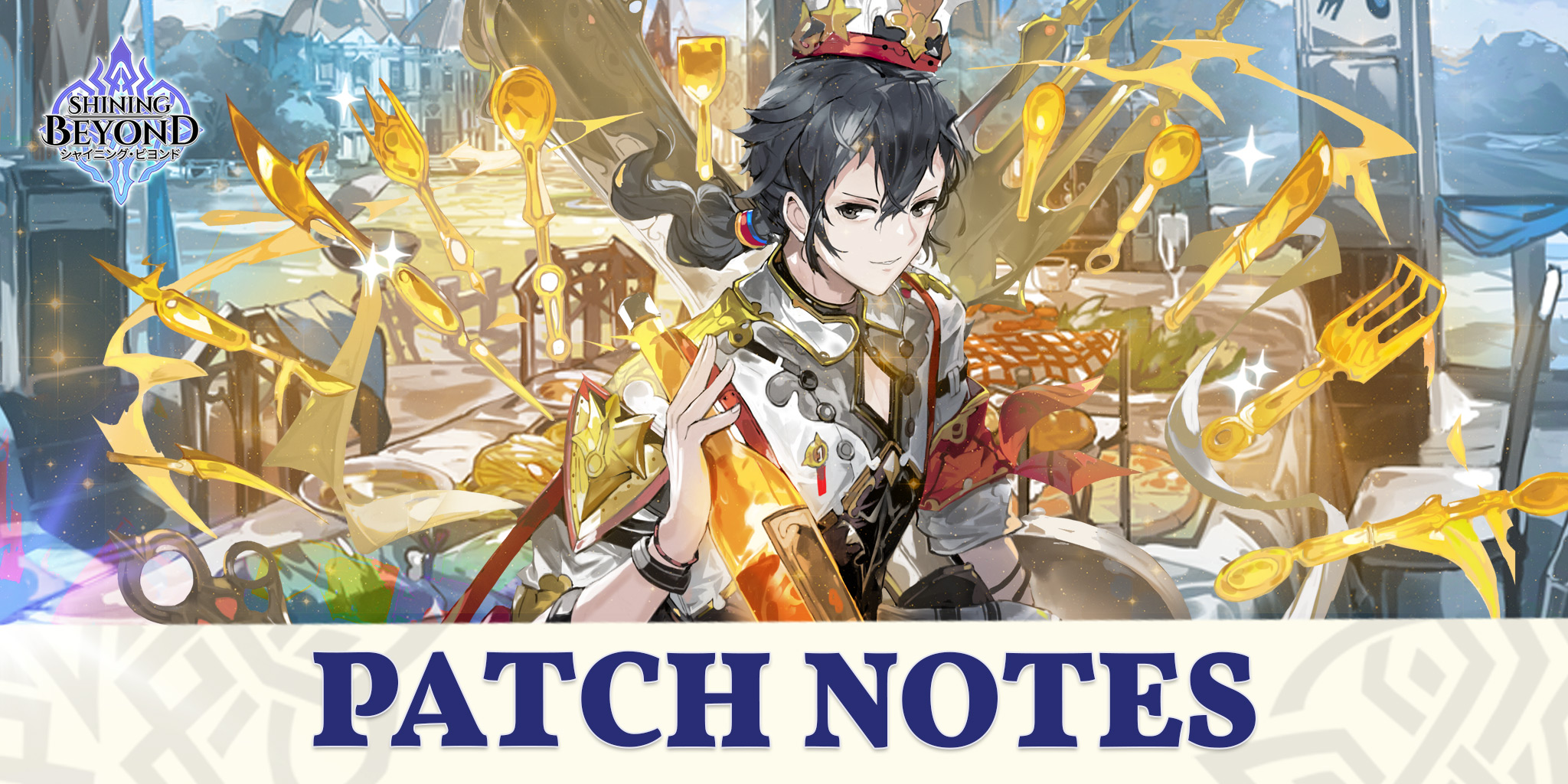 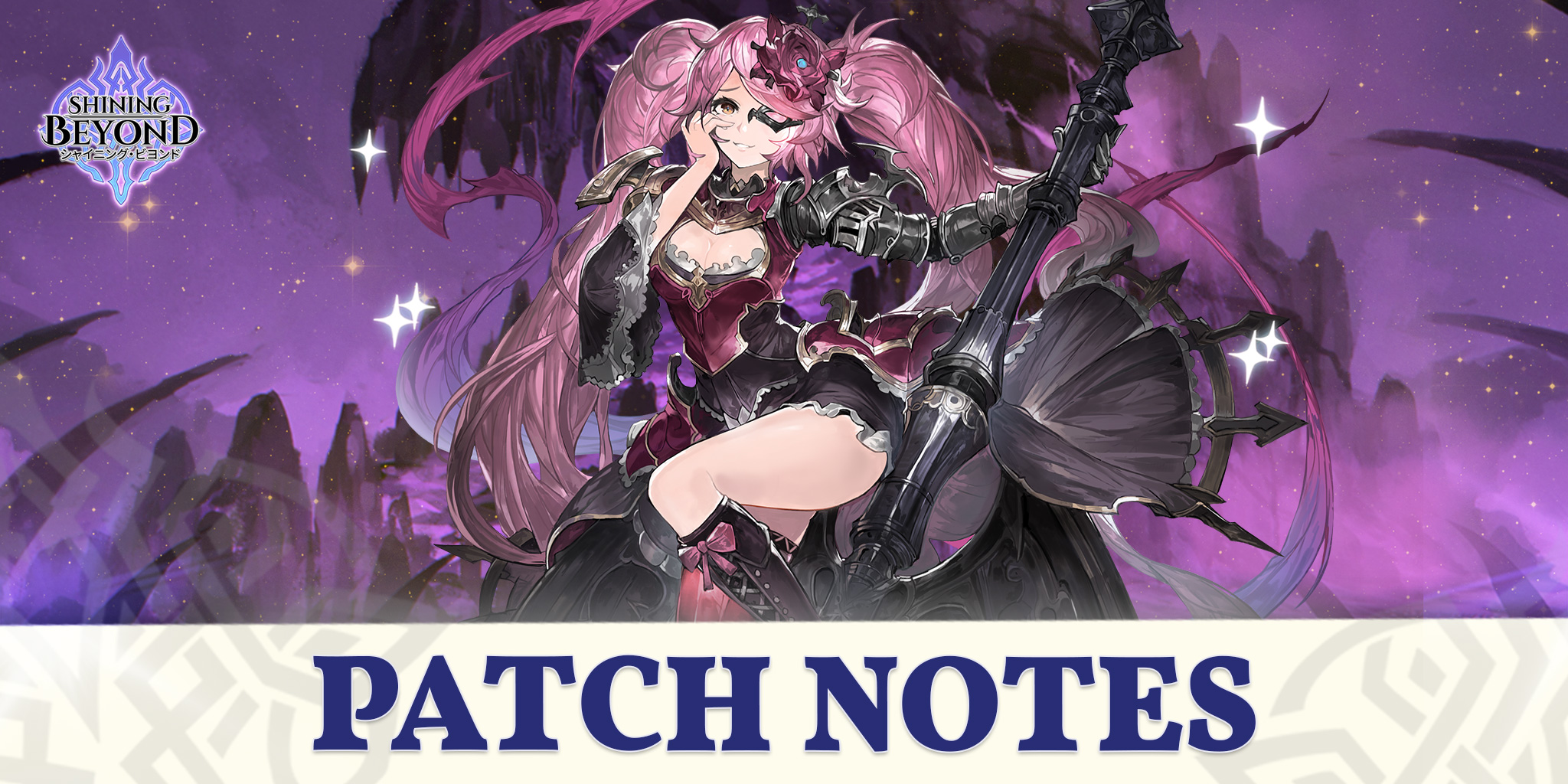 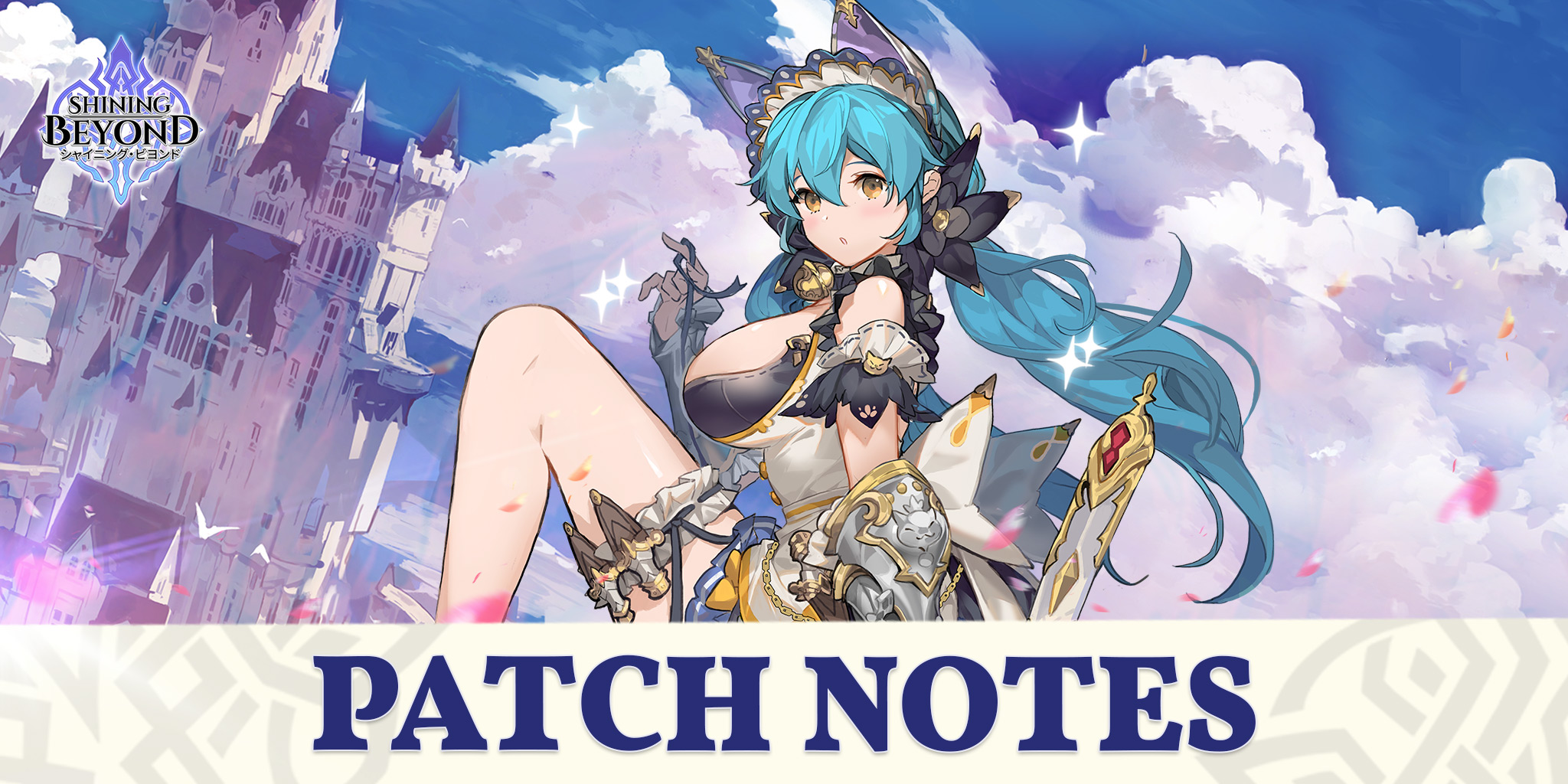